The goal of this contest is to provide a fun, challenging, and educational experience for our undergraduate students. 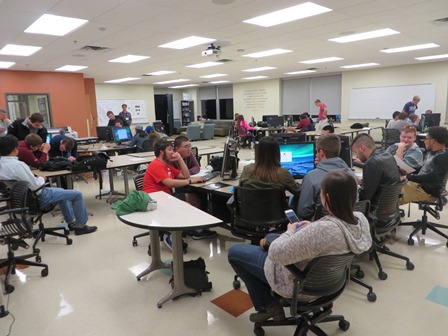 NEW FOR 2019!!  Contest teams may register as an “experienced” team or “novice” team.  A novice team is one comprised of ONLY novice students.  A novice student is defined as one having taken NO MORE THAN 3 computing courses. This definition allows upperclass students who are taking computing courses as free electives to compete as novices.  Awards will be given for the highest placing novice teams in addition to the highest placing experienced teams.  Indicate whether a team is a novice team on the registration form.

Note: These rules are subject to change due to site considerations. Teams will be informed of any such changes.

Each team consists of at most three student contestants from the same institution. Teams of fewer than three contestants are allowed, but discouraged as they usually are not competitive.

A student contestant must be enrolled in an undergraduate degree program at the sponsoring institution with at least a half-time load. This rule is not to be construed as disqualifying co-op students, exchange students, or students serving internships.

Conduct of the Contest

Solutions to problems submitted for judging are called runs. Each run is judged as accepted or rejected by a judge, and the team is notified of the results.

Contestants are not to converse with anyone except members of their team and personnel designated by the contest director. Systems support staff may advise contestants on system-related problems such as explaining system error messages.

The contest is scheduled for 4 hours but may be changed in the event of unforeseen difficulties. Should the contest duration be altered, every attempt will be made to notify contestants in a timely and uniform manner.

A team may be disqualified by the contest director for any activity that jeopardizes the contest such as dislodging extension cords, unauthorized modification of contest materials, or distracting behavior.

Teams may bring any written (hardcopy) reference material. This can include textbooks, language reference books, printed copies of programs, etc.

Scoring of the Contest

A problem is solved when it is accepted by the judges. The judges are solely responsible for accepting or rejecting submitted runs.

A team is allowed to use one personal laptop (per team) with wireless access as their contest machine. Teams are on their honor not to use any resources on their laptop other than those created in programming enviroments used during the contest. Accessing files not created during the contest will result in immediate disqualification. A (single) lab workstation (per team) also will be available for those teams who do not wish to bring a laptop to the conference. Information regarding local site programming environments will be posted here when known.

Problems will be submitted for judging using the Taylor University Touche’ submission system. It is a web-based, interactive submission system not unlike PC^2. A short User’s Guide is available.

Some Touche’ specific things to be aware of (mostly taken from the Taylor University Programming Contest FAQ):